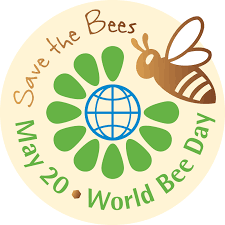 Day, and perhaps year, of the bee

In 2017, bees were given their own day, now they have been declared by the Earth Watch Institute as “the most important living being on the planet” during a meeting of the Royal Geological Society; hardly surprising with 70% of the world’s agriculture dependent exclusively on bees. That is before you consider the benefits from micronutrients they add to our diets, the health properties of raw honey and their role in maintaining biodiversity through the pollination of wild plants. Bees are one of the planet’s super-species!

Considering their numerous ecological roles and how vital they are to our food security, you would think we, as the human race, would be doing all we can to bolster the global bee population. Sadly, the reverse seems to be true. A number of recent studies have documented a dramatic decline in bee numbers, as almost 90% of the population has disappeared in the last few years, making bees an officially endangered species.

Loss of habitat, in particularly loss of the flowering plants on which they are dependent, to urbanisation, agriculture and deforestation has had a crippling effect on bee populations across the globe. So has the inappropriate use of pesticides, the devastating effects of which was witnessed first-hand in South Africa with the mass bee die-offs that happened on two separate occasions last year. One where hundreds of colonies died as a result of pesticides being applied to canola in full bloom, then a second blow to the same bee keepers when a phenylpyrazole insecticide that was also used in contravention of label instructions.

There is some good news on the horizon for the bees, with France taking the radical step and becoming the first European Union country to ban all five pesticides researchers have linked with bee deaths.

France’s decision to ban the use of clothianidin, imidacloprid, thiamethoxam, thiacloprid and acetamiprid may be a step too far for some; others believe responsible use of these pesticides would be enough to keep the bees out of harm’s way. It looks like Britain and other EU countries may follow suit, with a somewhat less comprehensive ban.
Currently, there are no plans of banning these pesticides in South Africa, however, emphasis has been placed upon implementing bee-friendly practices. To be honest, there is no excuse why this is not already happening. Responsible use of pesticides, which includes READING THE LABEL could have prevented last year’s mass bee tragedy. It is as simple as that.

To this end, TIPWG is in the process of developing a bee-friendly standard operating procedure (SOP). It focuses on a single message that could put an end to pesticide related bee deaths. Can you guess what it is?

Label instructions have been developed to minimise non-target effects and ensure key species are not affected by the pesticide in question. There is no excuse not to follow instructions. The SOP has been developed to improve understanding about what the label tells us, as well as how we can go above and beyond when it comes to protecting our buzzing-buddies.